Almost two weeks ago, 13 Reasons Why arrived to Netflix, the tv series that has invaded social media and is in everyone’s lips. Based on 2007’s bestseller by Jay Asher, it narrates Hannah Baker’s suicide story, a high school student harassed and mistreated by her classmates. This is a rather intense and at times raw story that aims to aware society, especially teenagers. Today we tell you the 5 reasons why you have to watch 13 Reasons Why.

Something that really stands out in this show, is the musics application. Always complementing the dramatic peaks of the narrative, this music selection is fairly precise for the tone of the story and its objetive target audiences. With quite dark genres like indie, alternative rock, electronic and post punk, it achieves the reaffirmation of emotions and gets you in the mood of the story.

Being a show about bullying and harassment leading to teenager suicide, it’s easy to imagine that the ones to blame are these typical bullies that give names and beat the weaker ones in the bath. Well, it isn’t completely. Indeed, this series shows this kind of harassment, however, it also shows the damage that close and real people who doesn’t intends to do wrong, can cause in us. From the friend who stops showing interest, to the guy who only tried to help but messed it up, one doesn’t need to be the goat of the class to identify with these stories. It gets to evidence that simple actions and the most human mistakes have results, and those aren’t always positive.

The structure of this show is pretty dinamic. In first place, each episode is based in one of the characters that influenced in the suicide of Hannah Baker, that way it’s easier to understand the responsibility in their actions. In second place, the show is narrated with time jumps between past and present that depends on Clay, the owner of the present point of view. Each episode treats one of the thirteen tapes that Hannah left explaining the damage done by each of these characters, which finally took her to commit suicide. As Clay hears them, the story unravels to us. 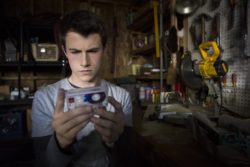 This is the story of a universal issue that unfortunately is still underestimated by schools, adults and teenagers themselves. The rawness and dramatization of an issue, sometimes helps to see everything straight and clear. Quoting Alex DeLange “It’s funny how the colors of the real world only seem really real when you viddy them on the screen”. In this manner, rawness and lack of censorship in some scenes, are validated by the aim of generate emotions and support awareness.

1. Because bullying is alarming and real

Unfortunately bullying exists and its taking more victims than ever. From suicides to massive shootings, harassment and mistreatment take its victims to mortal levels of despair and depression. Lives we forget to remind their value. Unfortunately society keeps underestimating this issue, especially kids and teenagers, the ecosystem where the problem inhabits. This kind of productions that appeal to the education of the youngest are very fruitful and convenient, as they approach a very deep and clear message.